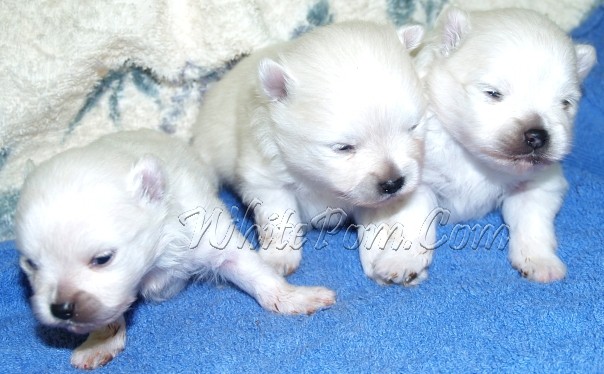 These “would be whites” may appear “white” to the uneducated but in actual fact these white Pomeranian puppies are usually cream or parti colours or even orange as adult Poms.

Most of the people selling cream, orange and parti colour Pomeranians puppies as white Pomeranians are just inexperienced. Other sellers are knowingly using a scam to attract buyers and sell puppies.

Cream Pomeranians and Parti Colorus often start life as near white puppies. Cream and pale orange and white parti pomeranians often start life as very close to white in colour. To the uneducated these puppies may look white, but they will not stay white. It is extremely hard to be sure if a puppy will be white until at keast 6 or 7 months of age.

A white Pomeranian at 6 to 12 weeks of age should be an absolute ice white colour, with no cream, lemon or very pale orange patches or shading on any parts of the puppy’s coat.
Carefully check the colour of hair behind the ears of the puppy.

This can be a very helpful guide to the adult colour of most Pomeranian puppies. Cream, very pale orange or lemon shadings behind the ears or in the hock region may mean that this puppy will be a cream or even a light orange Pomeranian adult not a White Pomeranian.

Owners who have purchased this type of Pomeranian Baby have told me they bought what was advertised as a white Pomeranian and thought the very, very pale cream patches where just dirt.
One owner even told me how she had tried to remove the “dirty” marks with a damp face washer, only to find as the months passed these pale patches darkened until her puppy was a parti colour.

At 8 or 9 months of age this Pomeranian Puppy was a pale orange and white parti colour. Pomeranian adult coats and colours can differ greatly from the soft fluffy baby pom coats.

Dochlaggie have often had litters consisting of darker sable Pomeranian puppies and nearly white puppies. All the puppies ended up to be a similar orange colour at maturity. In some cases it may be impossible to accurately predict the ultimate colour of the Pomeranian. View this article on coat colour changes in the Pomeranian.

Pomeranians start changing from puppy coat to adult coat anywhere between 4 and 8 months of age. Major changes can occur in a Pomeranian puppy’s coat colour during this period.

I have seen very close to white Pomeranian puppies with pale orange shadings behind the ears darken with age, until as an adult Pomeranian this puppy may be a light orange Pomeranian.

Then I have bred cream sable Pomeranian puppies, born a dark grey, fade to a very pale creamy white coat, with very pale grey coat tips at 9 months of age.

How to Safeguard Yourself from White Pomeranian Puppy Scammers

The above are extremely important safeguards.  As yet we do not have a puppy scammer list Australia available, so to avoid puppy scams Australia buyers need to proceed with caution. Unfortunately there are many Pomeranian scams on the internet.

Puppy sellers may be able to send photos of Pomeranian pups that appear to be white. The photos may have been touched up in photo shop, or the photo has been taken in the correct light etc. The photos may not even belong to the seller.

I have found people using photos of my white Pom puppies on the net to sell white Pomeranian puppies. One “lady” had used initiative, by adding a nice pink heart to blot out my copyright notice.

We all know the story that young men should look at their girlfriend’s mother to see how the girlfriend will age, graceful or otherwise. The same applies to all Pomeranian puppies, carefully check the parents of your new puppy. Chances are very good that the Pomeranian puppy will look like it’s parents at maturity.

Visiting the Pom Breeder is Important

If possible visit the breeder and see the puppy and the breeder’s other Pomeranians before purchase.
If you are buying on the internet without visiting the breeder, ask to see photos of white Pomeranian ADULTS, owned and bred by this Breeder.

Alarm bells should ring, if when viewing a website of a seller, there are only white Pomeranian puppies pictured and no white adult poms on the website. You could also ask for something in writing that your new baby is a white Pomeranian and will be white when an adult.

A registered, reputable Pom Breeder registers all their puppies, proves their Pomeranians in the show ring prior to breeding,  health tests, DNA profiles, micro chips, vaccinates, does not accept deposits on unborn, or newborn puppies, does not have credit card or PayPal signs on their website. 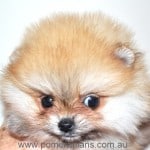 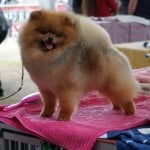