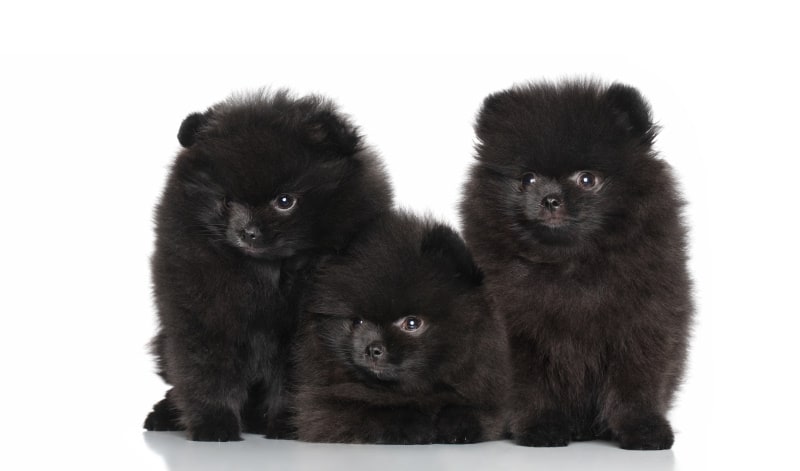 A solid Black Pomeranian dog should possess a coat which consist of black guard hairs with a black undercoat and should be a “coal black” color. The dog’s coat should be free of any red, white-colored or brownish fur. The points ( eye rims, pads, lips and nose) must be also be black.

Guard hairs on an adult, all black dog should be precisely the same colour throughout the dog’s coat. Exposure to sunlight can cause some burning to the coat, which will appear as red tinges on the fur of Pom dogs who spend long periods of time outdoors. A black Pom’s undercoat may possibly appear a lighter shade especially preceding shedding.

Some Pomeranian black puppies often will have greyish tones to their coat during the coat change or puppy uglies stage. This is usually nothing to be concerned about, as when the adult coat comes in the Pomeranian pup’s coat will usually change to a solid, bright black color.

Examples of a Pomeranian usually referred to as a mismark are a black pom with one white leg, or white feet or a white collar and blaze.

Black and Tan Pomeranians: As the name suggests, are black coloured poms with rust or tan markings.

Here at Dochlaggie, I have owned, bred and exhibited numerous black Pomeranians over a period of many decades and have found the Black poms seem to have a temperament and personality all of their own.

History of the Black Pomeranian Dog

Black Pomeranians were highly sought after in the early years of this breed. However the popularity of the black Pom declined when orange and sable Pomeranians made their appearance in the Pom dog world. Pomeranian breeders desperately wanted to breed and exhibit the highly desirable orange and orange Sable Pomeranians.

Early in the history of the breed, black Pomeranian breeders mated numerous quality black Pom females to any other colour Pomeranian dogs in an attempt to breed sable Poms.

No longer did the white Pomeranians and black Pomeranians rank top position in breeding programs and the show ring. Now there were other colours such as orange, sable, blue and chocolate as well.

The all black Pomeranian colour is just as popular today, as it has been during any time in the history of this dog breed.

Where Can I Buy a Black Pomeranian?

Puppy buyers who wish to purchase a black teacup Pomeranian puppy are advised to contact a reputable Pomeranian breeder.

How Much is a Black Pomeranian?

As a Pomeranian breeder, my black Pomeranian puppy price is the same as the other standard Pomeranian colours. All breeders have different Pomeranian prices.

Many black Pomeranians have contributed and greatly influenced the breed. A recent top winning black pom, was Best in Show Champion Finch’s He Walks on Water. Known at home and to his fans as Travis. Travis has been described as the biggest winning black Pom in the history of the breed. Travis was the winner of 12 Best in Show awards and sired 67 Pomeranian champions.

Another problem is the choice of contrasting colour clothing for the handler. Never wear black or dark coloured clothing when handling any black dog. Light and bright clothing is a much better choice for handlers of dark coloured dogs.

When you attempt to breed black Pomeranians, what you want will determine what you do. If you want to keep the intensely dark black pigment, don’t breed with Pom dog dilution genes.

If you plan to breed black Poms with black Pomeranians for numerous generations without including sable genes, it’s likely that the texture of the coat will be lost, but the black intense pigment will remain.

Grooming a black Pomeranian is a little more difficult than the standard or orange or orange sable Pomeranians. This colour dog’s coat needs special care and attention if it is to look it’s best in the show ring.  The black pom is another coloured Pomeranian dog who needs to be kept out of direct sunshine during the summer months to avoid any red tinges or sun burning of the dog’s coat.

N.B. This article first appeared on the Pomeranian headquarters website and is published here with written permission of the author.
Copyright Pomeranian.Org. All Rights Reserved. 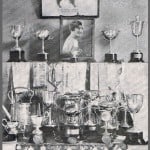 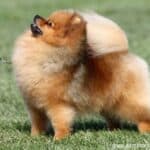