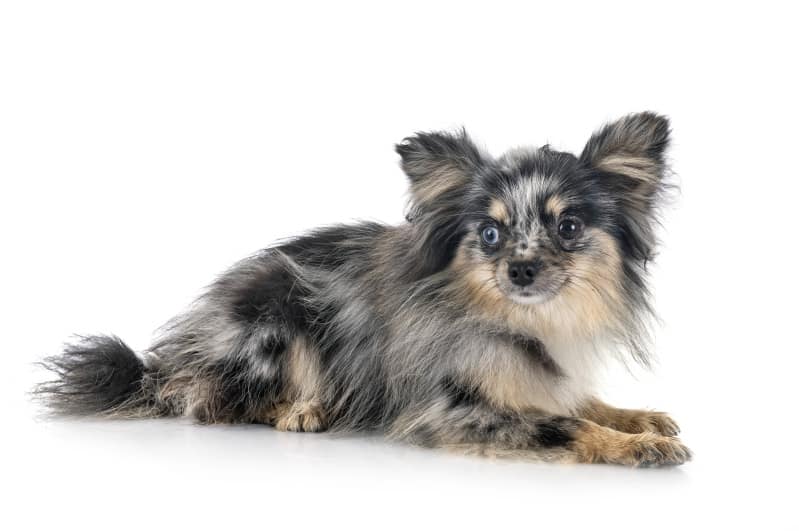 Merle is classified as a gene modifier that alters the colour pattern of a dog’s coat through his pigmentation. His eyes might also change to a blue. A blue eyed Pomeranian usually has a merle Pomeranian parent.

Other dog breeds who also have the merle gene including: Collies, Dachshunds, American Pit Bull Terriers, Great Danes and plenty of other dog breeds.

Particular specialty colours that may be mixed with Merle are: black and white parti Pomeranians and brindle Pomeranians.

It’s not possible to register a merle Pomeranian with the Australian National Kennel Council (ANKC) bodies here in Australia because it’s not recognised as an official Pomeranian colour pattern. Because of this, the merle Pomeranian is often bred as a result of unethical breeding practises.

Pomeranians and all other breeds with this specific merle gene tend to stand out because their coats can have some incredible colours, as well as spots and blotches all over and often appeal to a buyer wanting something unusual. In the previous two decades, Pomeranians have become vastly more popular, partly because of the unique qualities and colours of their coats.

The ANKC, the English Kennel Club, and the FCI have all taken positions against merle Pomeranians by not permitting such dogs to be registered. This joint undertaking is laudable, considering the number of potential risks to the health of the Pomeranian breed as well as doubts about their parentage.

There’s a serious health controversy surrounding all merle dogs so it’s something no owner should consider lightly. Any dog that has merle attributes has an extremely high potential of being blind and/or deaf when first born. Others might not be born with such isolating conditions but may face these down the track. A blue merle Pomeranian can also have reproductive problems as well as heart and skeletal troubles.

All reputable breeders know they should never, under any circumstances, breed two Merle parents together because the puppies born to such parents face enormous probabilities of suffering severe health issues as a result.

In fact, merle Pomeranians have been banned by the English kennel club completely. We strongly advise against breeding merle Pom parents because we don’t want to jeopardise the lives of any Pomeranian puppy litters in this way.

It has been suggested by numerous breeders that if you breed a merle and a Pomeranian with a solid colour, their lives would be safe. However, studies have revealed that even if you do breed in this manner, there may be puppies born with significant health challenges.

Not every merle Pomeranian will be forced to endure the problems already mentioned…some will enjoy a healthy, full life with none of these particular symptoms at all.

However, there are also plenty of dog owners/lovers who love owning and looking after dogs that are considered to be disabled. My faith in the human race is restored when I see different people sharing videos or photos of themselves demonstrating love for their blind, deaf, or otherwise disabled, dogs.

A phantom Merle (also known as a cryptic merle), is a legitimate Pomeranian containing the merle gene. However, he shows no signs that he’s a merle. The identifying coat and eye colours might not be visible. The scientific name of a phantom merle is the “atypical merle,” and may still produce merle puppies.

If you breed, we recommend getting your Pomeranian tested to ensure he doesn’t possess a hidden phantom Merle gene.

Despite the rarity, pitfalls and controversy associated with this specific Pom colour, it will be expensive to buy your own Pomeranian. The price tag will generally be $2,000 – $10,000 just to buy a Pomeranian. Then you also have all the other unanticipated health expenses to outlay. If you come across a Pom for only a couple of hundred dollars, you’re either very lucky or that dog has something seriously wrong with him, or the advert is scam and the puppy does not exist.

The actual truth is that the cutest Pomeranian puppies are bred by active show Pomeranian breeders.

It’s wise to ask about the parents of any puppy you’re interested in buying, to verify that both of the parents are NOT Merle because if they are, your puppies face a much higher risk of serious health problems.

Please understand that Merle Pomeranian puppies can suffer from a variety of health challenges. If you make the buying decision, be prepared to look after him and the health challenges he might face, to the best of your ability.

There’s a powerfully moral reason for not permitting registration of Merle Pomeranians in Australia. Anyone purchasing a merle Pomeranian puppy bred here in Australia should be aware they are supporting and encouraging unethical breeding practices.

The Pomeranian Handbook by Denise Leo 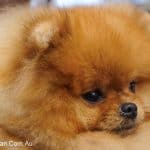 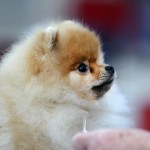