Where Pomeranians Come From?

The Pomeranian is believed to have descended from wolf-spitz type dogs which at some early period migrated to Pomerania from the north of Russia and Siberia. Sharing the same ancestors with many other Nordic breeds such as the Samoyed, Schipperke and Keeshond.

Why Were Pomeranians Bred?

These early spitz type dogs were used to work as guard and sledge animals, however the smallest were kept as companions. At this stage of development,the breed weighed 30 lbs and were coloured white, black or cream.

In many parts of Europe this breed of dog developed and was known by different names. In Italy the Volpino, France the Lulu, Belgium the Keeshond, Germany the German Spitz. A variety of the Pomeranian or Spitz was known for many years in Italy. The type of Spitz dog or Pomeranian peculiar to Italy was of a bright Yellow or Orange color.

Pomeranians were established as a breed in the eighteenth century after they drew the interest of the English monarchy. Upon her marriage to King George 111, Queen Charlotte brought large white Pomeranians to England in 1761.

However it was not until Queen Victoria’s reign that the Pomeranian became one of the most popular toy breeds. In 1888 Queen Victoria travelled to Florence, Italy and found a breed of dog called ” Volpinos “. These dogs resembled the descendants of Queen Charlotte’s  “Poms”, but were much smaller, weighing around 5 kilos.

Queen Victoria fell in love with these delightful little dogs, a love affair that was to last throughout her life. She brought home some of these dogs and called them “Toy Pomeranians”.

After 1915 the breed became known as the Pomeranian with the prefix “toy” being dropped completely.
Queen Victoria at one time had 35 of the breed in the royal kennels. In 1891 she showed six of the dogs at Cruft’s – Fluffy, Nino, Mino, Beppo, Gilda and Lulu.
A Pomeranian called Turi often accompanied the Queen on her carriage drives in the last years of her life and was at her side when she died.

Many famous people have fallen under the spell of this delightful little dog, including Mozart. More recently we have seen Fran Drescher’s Pomeranian “Chester” making an appearance in “The Nanny”. Fran Drescher’s newest Pomeranian, Esther Drescher.

The Pomeranian is the smallest member of the Spitz family. He’s a small, compact, dainty dog. He displays character and glamour.

His crowning glory is a dense, double-coat, made up of long, harsh, standoff guard hairs and a soft woolly undercoat. The Pomeranian’s coat contributes tremendously to the breed’s visual appeal.

The Pomeranian has a short, compact body, a short neck, and tight cat-like feet. He should move soundly with grace and style.

The Pomeranian tail is a unique characteristic of the breed. It’s profusely covered with long, harsh, straight hair and should be carried high and flat over the back. This plume of long glistening hair helps to give the illusion of a circle.

The head is wedge-shaped with a short fine muzzle. He has medium sized almond-shaped eyes, tiny pricked ears, and an intelligent sweet expression.

The Pomeranian breed standard deviates from most other breed standards by requiring the female to be slightly larger than the male.

A reputable, registered breeder will not describe their puppy’s by any of these terms. Beware of any “breeder” advertising using these terms. You can be sure that anyone who tells you they have teacup Pomeranians, miniature Pomeranians, or toy Pomeranians for sale is not a reputable Breeder. My advice is to always purchase from a reputable breeder, so I would look for your new family member elsewhere.

What is the lifespan of a Pomeranian? The average Pomeranian lifespan is about 12 years, but it’s not unusual for some to live a happy life well into their mid to late teens. Keeping your Pom trim and active will help prevent many health problems and enable him to lead a happy life into the mid-teens.

Desexing reduces the risk of many cancers, so it is a good idea to have this done close to puberty.

The Pomeranian is a delightful family member. He’s playful, energetic, loyal, loving, lively, outgoing and intelligent. He may come packaged in an extremely small parcel. However, he hasn’t forgotten his heritage and behaves as if he’s an enormously large Spitz dog.

Because Poms are intelligent and playful, they require lots of mental stimuli to keep them busy. They’re fiercely independent and succumb to “small dog syndrome,” a trait they share with numerous other small dog breeds. They require plenty of training to help them be social and to ensure good behaviour.

Poms respond well to training and enjoy learning, so it generally becomes easier to train them as you add new elements to the training regime.

Pomeranians can be yappy little dogs if allowed to misbehave. Like human children, well brought up Pomeranians are obedient, well mannered and a joy to live with.

Where Do Pomeranians Live?

Pomeranians are suitable for most situations, small homes, large homes, apartments. Flat dwellers will find that a Pomeranian adapts well to apartment living. A Pomeranian is happy to snooze or play with toys while their human family are away during the day.

Can Pomeranians Live Outside?

The Pomeranian is a toy dog and must be provided with suitable inside accommodation.

Owing to the diminutive size and high energy level the Pom dog is not recommended for families with young children. Pomeranians make loyal, loving and very intelligent companions for the elderly.

More Information regarding this delightful dog breed is available on our site Pomeranian Resources. 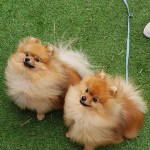 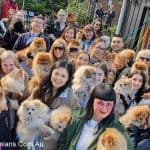